“We have a fundamental problem in this country exacerbated by the president spreading misinformation and disinformation where we cannot agree on common facts. That is a failure of leadership expressing itself in a real, historic, horrible death toll on his watch.” @JohnAvlon 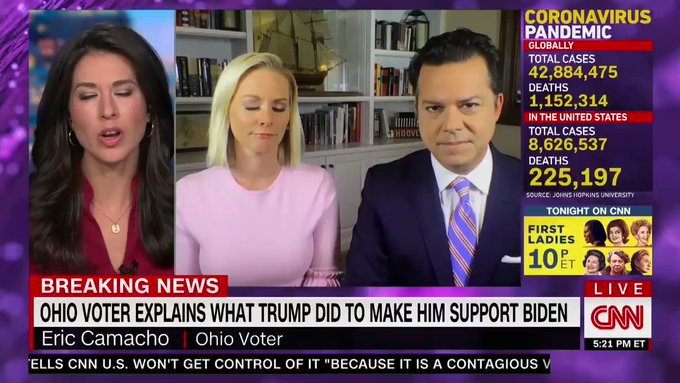 “There are about 6,8,10 Republicans in the senate who are talking with each other about how to restrain what they regard as an out-of-control, almost madman…who is determined to do anything to hold on to office regardless of its legality.” @carlbernstein  reports 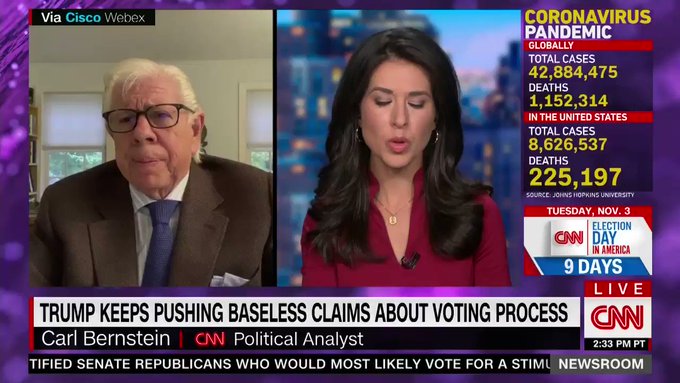 JUST IN: Pre-election voting for the November election has surged past all 2016 early ballots cast with 9 days left until Election Day.

58.7 million+ ballots cast so far, according to a survey of election officials in all 50 states & DC, by CNN, Edison Research & Catalist. In 2016, around 58.3 mil pre-election ballots were cast, including ballots in the 3 vote-by-mail states that yr, according to a CNN analysis

Hope to see you tonight 8:00pm est at the Biden/Harris #IWillVote  virtual concert.  Join Joe, Jill, Kamala, Pink, Dave Matthews, John Legend and many more.  I’ll be there too. I have a little surprise 🙏🏻

Disinterested in absolutely everything

I’ve done no work since we got this cat.

This is horrifying. “Utah’s hospitals prepare to ration care as a record number of coronavirus patients flood their ICUs”

“Under the [proposed rationing] criteria, patients who are getting worse despite receiving intensive care would be moved out first. If two patients' conditions are equal, the young get priority over the old, since older patients are more likely to die.”